Protection of civilians from Sexual and Gender-Based Violence (SGBV) 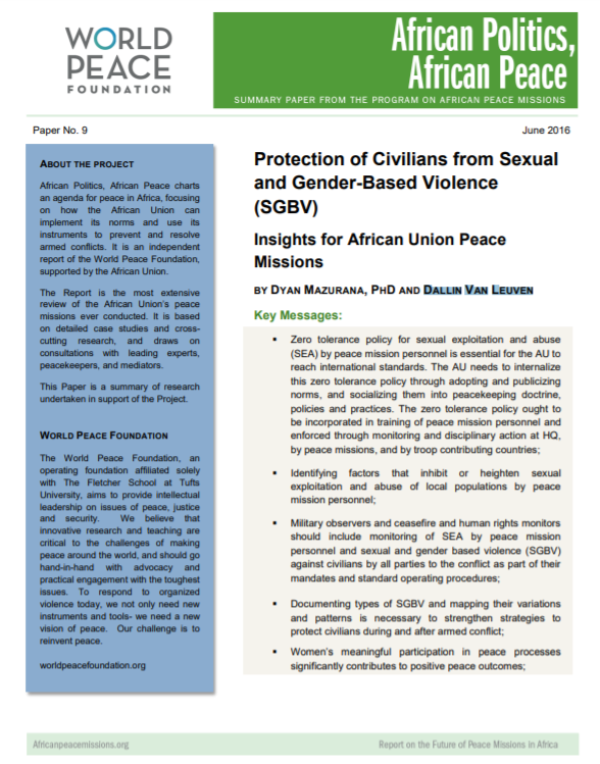 This paper reviewed 381 documents on the commitments of African states through national and international law to protect civilians against SGBV during and after armed conflict, forms of conflict-related SGBV, patterns of SGBV in conflict; factors related to peacekeepers’ SEA of civilians, and how women’s inclusion in UN peace missions and peace processes affects overall mission success. They found key factors that seem to drive acceptance and practice of SEA in AU mission areas are widespread male domination and female subordination, females being coerced into sex for survival and access to resources (both prior to and during the conflict), and SEA within the community being seen as acceptable by the local populations.

Up
210
Undo
Type of document
Evidence / literature review
Countries this relates to
East and Central Africa
Language of materials
English
Type of safeguarding this relates to
Protection from sexual exploitation and abuse and sexual harassment; PSEAH
Programme/thematic areas
Justice and peace building

The safeguarding of children, young people, and adults at risk of harm, protects them from neglect, abuse or harm. The MSc Safeguarding: Leading…
Read more

Sexual Harassment within the aid sector, and the Syrian context: The history, available services, and challenges in addressing it

The webinar will aim to provide a general overview of the history of sexual harassment within the aid sector. Contributing to the discussion, are two…
Read more

Protecting persons with disabilities from Sexual Exploitation, Abuse and Harassment in humanitarian crisis

The webinar aims to raise awareness on the factors that make people with disabilities vulnerable to Sexual Exploitation, Abuse and Harassment and how…
Read more

Noel Remasu works as the Communications and Tech Support person for the RSH South Sudan Hub. He works closely with the National Associate to promote…
Read more

Kingsley Okpabi O. is a graduate of Fishery and Aquaculture from Federal University of Agriculture Makurdi, Benue state. He is currently the National…
Read more

Are you looking for safeguarding experts in South Sudan and Africa? Click here to view our directory of Service Providers.

Do you want to Join RSH? Click here to get the latest news and information from the team.